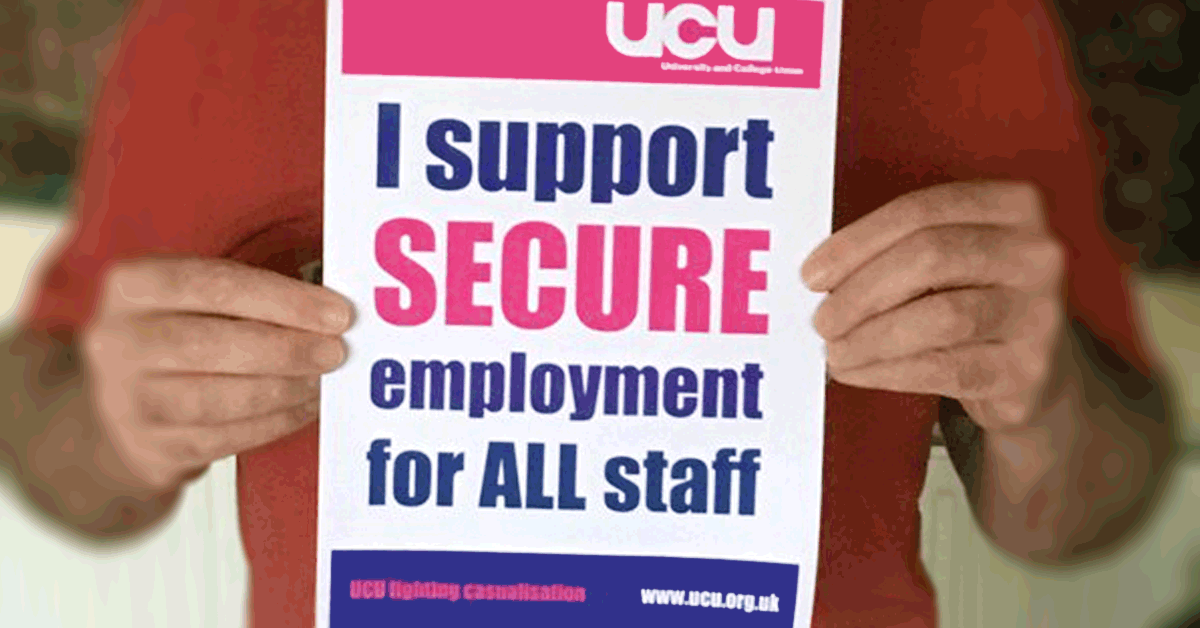 UCU believes that high quality education and fair working conditions depend on contracts that give staff stability and continuity of employment. Casualisation is bad for staff and bad for education, yet it’s endemic in our colleges and universities.

Help build the campaign in your branch.

46% of universities and 60% of colleges use zero hours contracts to deliver teaching.

68% of research staff in higher education are on fixed term contracts, with many more dependent on short-term funding for continued employment.

Taking the fight against casual contracts on the road.

Stamp Out Casualisation is UCU’s campaign to win continuity of employment and fairer contracts for casualised staff.

The campaign against casualisation is one of UCU’s national priorities.

Read more about how UCU is working toward and winning greater continuity of employment and better pay for casualised staff.

Counting the costs of casualisation

New research from UCU has found that staff on insecure contracts working in further, adult and prison education are holding down multiple jobs and visiting food banks in an effort to makes ends meet. The report exposes the lie that flexible contracts are supported by workers and employers as it found that almost all staff want a permanent contract and around three-quarters said they would sacrifice flexibility to secure a job with guaranteed hours:

Counting the costs of casualisation in further education, Jun 19 [711kb]

A similar picture exists in higher education, with the latest UCU report revealing that staff on insecure contracts are reporting that the lack of security is damaging their mental and physical health while they have to hold down multiple jobs while struggling to pay bills. The report warns that the widespread use of casual contracts is damaging the quality of research and the education students receive.

Counting the costs of casualisation in higher education, Jun 19 [318kb]

In 2016 UCU wrote to every college in England and every university in the UK where the union has a branch, asking them to engage with us in tackling the abuse of casual contracts.

We have collated the results of this exercise alongside other available data and have provided tables for you to see how your institution ranks in a series of indexes of insecurity.

We regularly follow up this research with further Freedom of Information data requests:

Precarious education: how much university teaching is being delivered by hourly-paid academics?, Feb 18 [563kb]

UCU has an advisory committee representing staff on casualised contracts, elected at an annual meeting for casualised staff.

The committee’s priorities are:

The committee runs a blog on their work and how our union is winning improvements for precarious staff: ucuanticas.wordpress.com

Further information about the campaign can be obtained from Jane Thompson.

If you are a member who has a query about any issue please contact your branch or local association in the first instance.

We are calling for all students to be vaccinated before September and for masks to be made compulsory in both further and higher education.

A repeat of the disruption last year would be unforgivable.

Who has profited from Covid-19 and what can we do about it?

Join the STUC alongside @L__Macfarlane, @oeufling and @UnionTyke as we discuss Scotland's economy and how trade unions can respond to the current landscape.

A lot has already been said (by us and others) about proposals to quarantine students on ships. ⛴️

But - let's also consider that it literally costs less to go on a Caribbean cruise than it does for these students to access their education. #StudentsDeserveBetter https://twitter.com/SundayTimesSco/status/1414137339505520640

EXCL. Cruise ships wd be used to quarantine thousands of students from red-list countries under plans explored by Scottish Govt. Critics warn of petri dish like conditions. 1st UK Covid death was someone infected while quarantined on a cruise ship

Saddened to hear of the death of Emma Ritch. There will be time to reflect fully on Emma's impact on women's equality and rights in Scotland but for now, simply to pass on our condolences and thoughts to Emma's family, friends and colleagues from everyone at UCU Scotland.

It is with profound sadness we share the news that our Executive Director, Emma Ritch, passed away suddenly on Friday 9th July.

We will be closed this week as we collectively process the loss of our brilliant director, colleague, and friend.

Great to see the increase in applications to study at Scotland’s universities! We must provide more student places and invest in staff #HE https://www.ucu.org.uk/article/11657/Record-increase-in-university-applications-prompts-calls-for-more-student-places-and-investment-in-staff#.YOa2pGTRa7w.twitter